On Eagle Semen and Lessons Learned 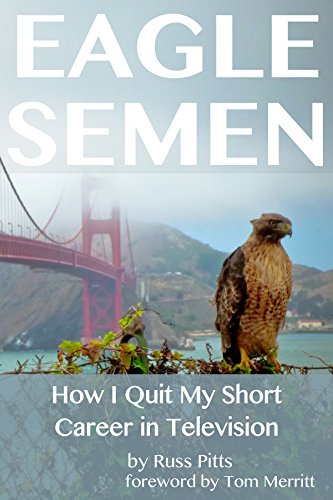 Starting this month I’m selling my book “Eagle Semen” as an eBook through Amazon. It’s the story of how I quit my job as a producer of TechTV’s The Screen Savers in the worst possible way, and why.

What the book doesn’t really go into, though, is what happens after you write an email like that. At the time I thought I was walking away from working in television, and that it really wouldn’t matter what people would think of me for writing an email about all of them “drowning in eagle semen.” I was right and wrong.

As it turns out, I never did work in television again (nor do I intend to), but it does matter what people think of me. Not only did I manage to burn bridges with many of the people I worked with at TechTV (most of whom did me no wrong), but at every job interview since I’ve been asked to address that email, and there have been times when I’ve missed opportunities because of having written it.

I have zero regrets. After all, I’ve done alright. And the person I am today needed to be the person I was then. But one of the lessons I’ve learned over the years is that how you say goodbye matters just as much, if not more, than how you say hello. I’ve never again written such an angry farewell email.

That said, I’ve been tempted. And I’ve also been tempted to “revisit” the “eagle semen” email in sly ways. But in the end (no pun intended) I’ve tended to fall on the side of trying to inspire and encourage those I’m leaving behind, rather than intimidate them.

Below is an email I wrote (but never sent) when I was leaving Polygon in July of 2014. It’s a riff on the “eagle semen” email, but, I think, much more positive.

When men look to the sky, they see the eagle soar and feel shame that they, too, can’t fly. When eagles see men, they see all that man might be and know that some day man, too, will fly.

As you walk into the future that awaits you, don’t look to the sky and see the eagles and doubt that you belong among them. Instead, allow yourself to be filled with the spirit of what the eagles see in men, and know that one day, you too will soar.

If you want to read the original “eagle semen” email, as well as the story of how I worked up to writing it, you can buy my eBook “Eagle Semen” for $2.99 at Amazon.